Get the whole incredible story.

More Information On “The Greatest Team”

About "The Greatest Team"

At Notre Dame, the "Rockne Mystique" acted as a magnet to draw in an unprecedented depth of talent. Add to the mix a uniquely skilled and somewhat fanatical coach with a burning desire to win, and a belief that losing was an affront to the Blessed Virgin. It would soon be clear that these Notre Dame Teams could not be rivaled. 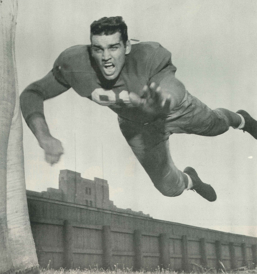 This is the most amazing story in college football!  - The story of the 1946 and 1947 Notre Dame Football squads.

Two million U.S. soldiers returned from WWII, enrolling in universities across America on the G.I. Bill. Battle hardened men joined incoming high school graduates to "play some football" creating the most competitive era in college football history. A team that could dominate in this era could lay claim to being The Greatest Team ever.